This is my story… 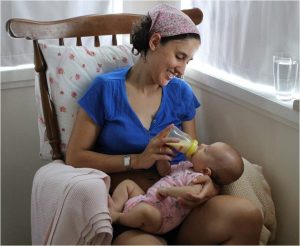 This is the face of postnatal depression and anxiety. Well, one of them. It’s the face of crippling self-doubt, relentless self-hatred. It’s the face of throbbing guilt and constant, constant failure. I know, because it’s my face. This picture was taken during the most difficult time of my life. But you wouldn’t know, would you? Like a lot of parents with postnatal depression and anxiety, I was very good at hiding it. After all, here I was holding this beautiful, healthy, thriving baby – my very own “bundle of joy”. What right did I have to feel miserable? What was wrong with me?

It’s a question I spent a lot of time considering, because as far as I could see, I was the source of the problem. Parenting was not supposed to be like this. Just look at all those mums out at cafes, beautifully dressed, their babies sleeping in the pram beside them or gurgling happily over a toy. They were managing. They were able to get their babies to sleep. Their babies weren’t screaming all the time. Surely that’s what motherhood was supposed to be like. It’s roughly what I expected. Sure, I’d heard a few comments about how life changes. I knew I wouldn’t be getting much sleep, but until you experience it, I don’t think anybody really understands the bone-aching exhaustion that comes from having your sleep constantly interrupted, night after night. I was no different. I heard “you’ll be lucky to get out of your pyjamas before lunchtime.” That didn’t sound too different to the odd lazy Sunday I’d had before becoming a mum. But the reality was not so much still-in-pyjamas-at-midday. It was closer to haven’t-showered-for-4-days-and-don’t-know-if-it’s-AM-or-PM.

What seems strange to me, looking back, is how insurmountable a problem like this seemed at the time. I didn’t shower because I couldn’t see how my baby would be alright without me for the few minutes that it would take. I had to be constantly on-duty, working to solve my “problem” of a baby who wouldn’t sleep. But at the time I couldn’t see anything unusual about this state of hyper-vigilance. I guess if I’m being honest, I also just couldn’t muster the energy for this sort of basic care of myself. Deeper down, I believed I no longer deserved it.

The idea that I was experiencing a condition for which I could seek help and support didn’t cross my mind at the time. It seemed natural to me that I should be having such negative thoughts about myself. After all, I had failed at something that was the essence of being a woman. I often said in the early weeks after my baby arrived that I was “none for two” – I couldn’t give birth to her and I couldn’t feed her.

Of course, looking back, I can see that it wasn’t as simple as that. But my birth experience was so traumatic for me that I still have trouble embracing that truth wholeheartedly, no matter how much I logically know it to be true. Again, what right did I have to feel traumatised, or even disappointed? There was no scary medical emergency. My baby and I were both fine. I had simply, after 48 hours of labour “failed to progress” (not my words in this case – this is the delightful clinical term applied in these situations). In the end, I had a caesarean. Of course, I knew going into the birth that this was a possibility. But I’d always imagined that if I did need a c-section, it would be a dramatic, emergency situation. A doctor would shout “We have to get the baby out NOW!!” and I would reply “Of course! Of course!” Instead it was more along the lines of “look love, you’ve had a crack at it but the results have been pretty shabby. Why don’t we just take it from here?” to which I replied “um, yeah…I guess so”.

The experience of the caesarean itself may have been ok if I wasn’t already such an emotional, sleep deprived wreck. But as it turned out, it was one of the scariest experiences of my life. I had a panic attack on the operating table after my baby was out, suddenly feeling like I couldn’t breathe, and I missed the first precious half hour with her thanks to the sedative I was given to calm me down. Writing about it now I can see why I struggled emotionally with that situation, but at the time I blamed only myself. And perhaps that mindset, that feeling of being hopeless and defeated from the start, set me up for further disappointment when it came to breastfeeding. I was so desperate to make it work, to prove that I wasn’t a complete waste of space. I’d read so much about breastfeeding – how to do it, why it was so important, common problems and how to solve them. I’d been to an Australian Breastfeeding Association course and connected with my local group. I was ready to go. And yet, I couldn’t seem to make it work. My nipples were a bleeding mess and my baby just screamed and screamed and screamed. So, bottles it was, at first to supplement breastfeeds, and later to replace them. That’s why I know that this moment in this picture was a dark one for me. Because every moment with a bottle was. Every moment when my baby would guzzle greedily from the bottle and look up and me with a contented smile and a tummy full of formula felt like a stab to my heart. But I would smile. Because that’s what you do. And as I sterilised the bottle later, I would think over and over about what it would be like to plunge my hand into the hot water or steam and burn myself – give myself a physical mark on the outside to match the pain on the inside.

I never did harm myself, although I thought about it many, many times. Instead I went through the motions, focused on how to solve the feeding problems, how to improve my settling technique, how to be a worthy mother and a good enough woman. And I smiled for the camera.

It’s because of those smiles that I know something important. I know you never really know what’s going on for someone else unless you ask. Really ask, and really listen to the answer. Over 1800 Australians are diagnosed with ante or postnatal depression every year. For anxiety it is expected the figure at least equals this number, perhaps even exceeding it. And remember those mums at the café, with the perfect smiling babies? It could even be one of them.

I eventually got help and made a full recovery from my anxiety and depression. A huge part of my recovery was the support I received from other parents through an organisation called Peach Tree, and I now volunteer my time to help other parents going through a similar experience to mine. Peach Tree is run entirely by volunteers like me, who have experienced perinatal mental illness. On Saturday 21 November, Peach Tree is holding its inaugural Vintage Gala at Victoria Park’s “Garden Marquee” in Herston. The event will mark Perinatal Depression and Anxiety Awareness Week, as well as raise funds to help Peach Tree continue to support parents, raise awareness, and help expecting parents preparing emotionally for the transition to parenthood. The gala will feature a photo wall with images like mine, to show the true face of depression and anxiety in pregnancy and early parenthood. By sending in your picture, you can help bring these illnesses out from the shadows, and show that they affect everyday mums and dads from all walks of life.

My story is tough to write about, but even tougher to keep secret. Because the thought of another parent suffering the way I did breaks my heart, and I know it doesn’t have to be this way if we as a community can open our minds and our hearts to these illnesses and bring them out from behind closed doors. By showing my face, I hope I can help someone else show theirs.